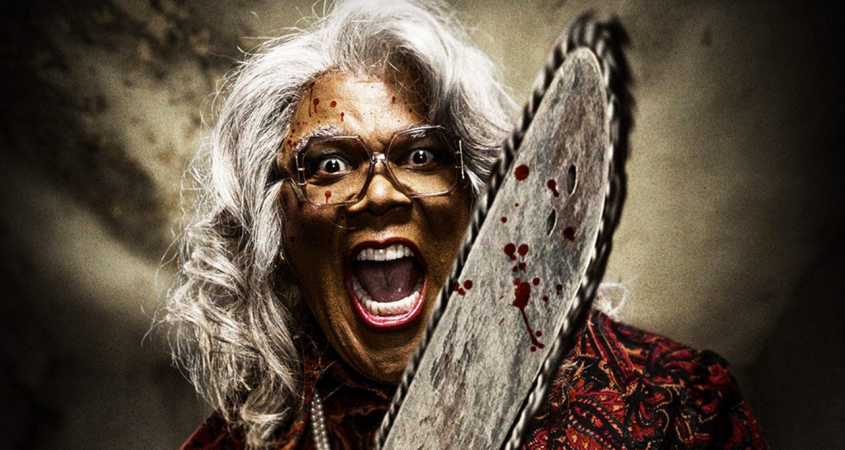 Tyler Perry’s latest movie, Boo! A Madea Halloween, easily won the weekend box office with $28.5MM (adjusted up from $27.6MM).  Not only did it beat Tom Cruise’s Jack Reacher: Never Go Back by $5.6MM but doubled it on a per screen count, $12,611 vs. $6,051. Rounding out the top five were Ouija: Origin of Evil (which also premiered this weekend) at $14.1MM, Ben Affleck’s The Accountant and the third week for The Girl on the Train.

A big reason for this movie’s success was that it had crossover appeal.  (Zombies are in right now).  The typical audience for a Madea movie is 80-90% black, where A Madea Halloween was only 60% in the demo.  This can be attributed to a successful marketing campaign that started with an effective, and very funny, trailer.  It already has over 3MM views on YouTube.

Tyler Perry was also out there promoting it.  He went on The Tonight Show, as Madea.

And appeared on Ellen, as himself.

This is the sixth Madea movie, three of which premiered at #1.  And for the three that didn’t, they each had stiff competition.  A Madea Christmas was up against the launch of The Hobbit: The Desolation of Smaug and the 4th week of Frozen; Madea’s Witness Protection lost out to Ted, Magic Mike and Brave; while Madea’s Big Happy Family was $1.3MM from overtaking the 2nd week of Rio.

Boo! A Madea Halloween should have a decent run at the US box office.  The first few Madea movies had multiples of 2.1 or 2.2, increasing to 2.6 and the most recent was 3.3. ($52.5MM Domestic Gross / $16.0MM Opening Weekend = 3.3). Conservatively this movie will have a 3.0 multiple and end with $85.5MM, making it Tyler Perry’s second best movie. With such a broad appeal, Halloween still ahead, and the only wide release this weekend is Tom Hank’s Inferno, Madea will have some legs in the theaters.  Which, based on the trailer, she’s going to need them.